UNESCO Global Geoparks are territories that promote geodiversity through community-led initiatives to enhance regional sustainable development. They help monitor and promote awareness of climate change and natural disasters and many of them help local communities prepare disaster mitigation strategies.

With this year’s eight additions, the Global Geoparks Network now numbers 127 UNESCO Global Geoparks in 35 countries. They celebrate the 4.6-billion-year history of our planet and the geodiversity that has shaped every aspect of our lives and societies. Furthermore, Geoparks create opportunities for sustainable tourism, whose importance has been recognized by the United Nations, which named 2017 as International Year of Sustainable Tourism for Development.

The UNESCO Executive Board unanimously endorsed the selection made by the UNESCO Global Geoparks Council.

The eight newly designated sites are:

Arxan is a mid-low mountain region situated in China’s Autonomous Region of Inner Mongolia. With 35 well-exposed volcanoes that are over 2.5million years old, Arxan features an exceptionally dense concentration of volcanic landforms, with a rich variety of lakes and natural springs.  The UNESCO Global Geopark has developed extensive sustainable rural tourism services which offer the visitor a rare and unusual experience of a northern Chinese frontier area.

The Causses du Quercy UNESCO Global Geopark is located in the southwest of France, at the northern end of the Midi-Pyrénées region. It features a unique karst heritage shaped by a unique geological history that led to the formation of phosphate caves containing thousands of perfectly preserved fossils that recorded life conditions 52 to 20 million years ago. It makes this area a true “natural evolution laboratory”. The study of these fossils is part of a participatory science education programme, Graines de paléontologues (“paleontologists seeds”) for elementary and secondary school students. 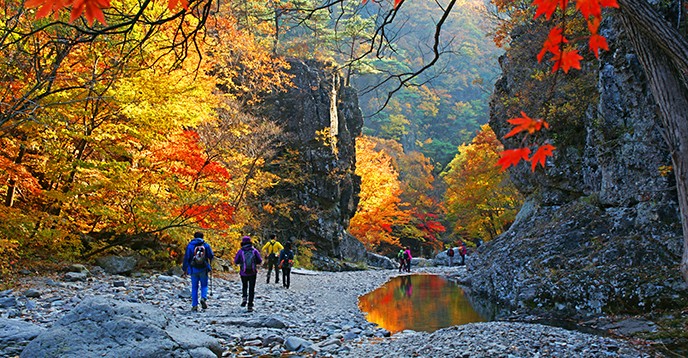 Cheongsong UNESCO Global Geopark is located in the central eastern area of the Republic of Korea. Its name is derived from “Cheongbo” and “Songsang,” meaning “green treasure” and “pine tree ecology,” respectively. The volcanic rocks in Cheongsong have exceptionally high silica content, which caused the hot lava that flowed from the area’s volcanos to form balls of dark and light layers as it cooled down. This has resulted in a unique and beautiful type of rock, locally called the Flower Stone. 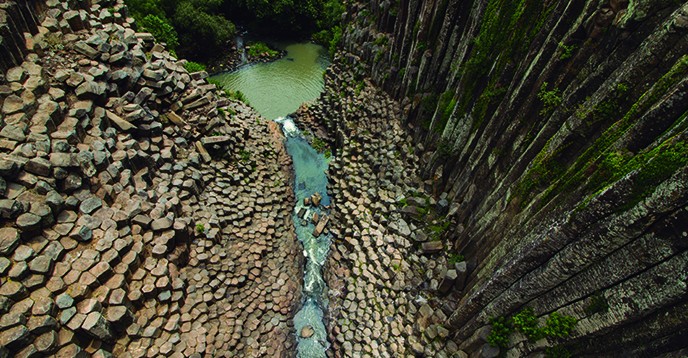 The Comarca Minera, Hidalgo UNESCO Global Geopark is located in the State of Hidalgo, to the east of central Mexico, The Geopark’s most remarkable geological feature are the Prismas Basalticos, basalt or volcanic rock columns, first described in 1804 by Alexander von Humboldt, the Prussian geographer, naturalist and explorer. The 2.58-million-year-old Prismas Basalticos are exceptionally tall, some over 40 metres in height. They are the most famous basalt columns in Mexico and among the tallest in the world.

Keketuohai UNESCO Global Geopark is located in the Xinjiang Uygur Autonomous Region of China, in the inland area of Central Asia. With its spectacular granite landforms, the Geopark has sometimes been referred to as China’s Yosemite. The mainly Kazak inhabitants of the area have a rich history and culture preserved through many distinct local traditions. The site also features the unique Botamaoyin rock paintings, which are at least 3,000 years old.

The Las Loras UNESCO Global Geopark is located in Spain, north of Castile and León. Its high altitude limestone moorlands, Loras, are characterized by mountainous folds of earth separated by spectacular river canyons. They dominate a spectacular landscape of natural fortresses that have been used by successive populations and cultures for refuge and protection throughout history. The area is dotted by caves, limestone cliffs, and karst landscapes resembling ruins with countless waterfalls. The well-preserved small villages of Las Loras have fine Romanesque churches, rock hermitages and examples of popular local architecture.

The Mixteca Alta, Oaxaca UNESCO Global Geopark is located in Mexico’s mountainous Sierra Madre del Sur province. The name of the Geopark is derived from the Mixteca civilization, which flourished from the 2ndcentury BC to the 15th century AD and ended with the arrival of the Spanish Conquistadores in the early 16thcentury. The UNESCO Global Geopark features trails along which visitors guided by local residents can examine the geological heritage of the region and its relation to ecological, historical, archaeological and cultural features.

Qeshm Island UNESCO Global Geopark is an island shaped like a dolphin in the Strait of Hormuz, off the southern coast of Iran. Its exposed geological formations have been shaped by erosion generating a range of spectacular landscapes and beautiful rock deserts. Its preservation is supported by green tourism activities managed by local communities.

The Executive Board of UNESCO also endorsed two requests for substantial extensions to two existing UNESCO Global Geoparks in China: Leiqiong and Zigong .